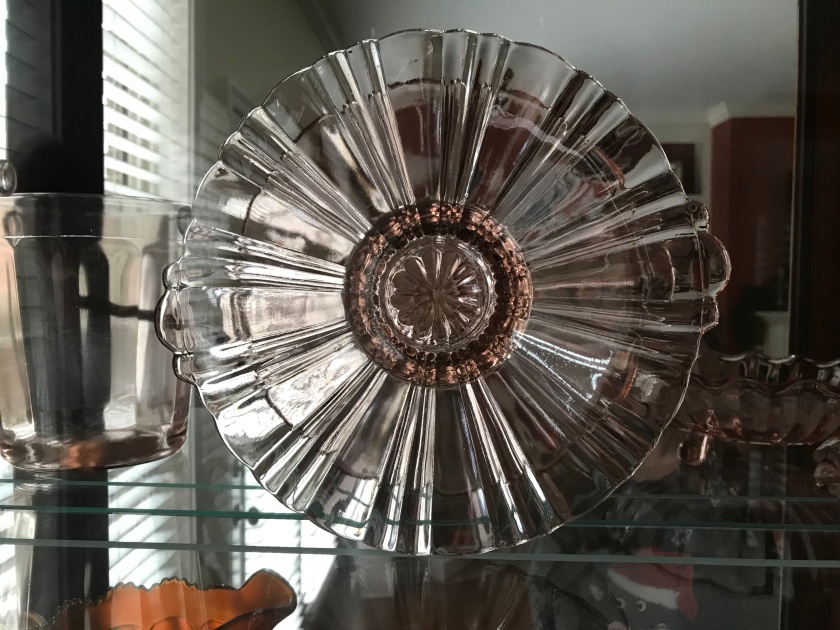 Depression glass sounds, well, depressing. It is far from it as can be seen in the photos below. Depression glass was made from 1929 to 1939 in the United States during the, you guessed it, Depression. Such pieces in beautiful colors of pink, yellow and green, are collectors pieces today and I have about two dozen dishes passed down by my maternal grandmother who I called Mammy. I love them because they were hers and then my Mom’s. I wonder where they will end up, because my heirs are not likely to really care for them. They are not that practical to use, since they are rather fancy in design. I’m guessing that they brightened the daily life of many homemakers during the depression when money and everything else was scarce.

One of the best things about these fancy dishes is that they could often be obtained for free in products such as Quaker Oats or at very low prices, making it possible for most homes to have at least a few pieces during that era. My depression glass makes me happy because of the memories it evokes.

Carnival glass is harder to describe so I’m going to rely on the three photos below and Wikipedia: “Carnival glass gets its iridescent sheen from the application of metallic salts while the glass is still hot from the pressing. A final firing of the glass brings out the iridescent properties of the salts, giving carnival glass the distinct shine it is known for.”

Carnival glass was first made in the US, but later was produced in almost every country. It was particularly popular in Australia. Huge production took place in the 1920s, again when housewives were looking to brighten up drab lifestyles and homes. The name comes from the fact that such pieces were often given as prizes at carnivals and fairgrounds. Much of it was sold, however, and some pieces today are collector’s items which can be worth considerable amounts of money, particularly the scarce colors. Carnival glass is fun because it is so different from what we commonly see today.

I have a few pieces of Carnaval glass passed down by each of my Grandmothers.

Fiesta dish ware speaks for itself! It is made in a fiesta of colors and it has brightened my home for over 60 years. It comes in open stock and I chose it for my dishes rather than a china pattern when I wed back in 1960. China came later, but Fiesta dishes served our family growing up and still decks my table today, everyday.

Fiesta is a line of ceramic glazed dishes introduced by the Home Laughlin Company of West Virginia in 1936. The art deco style dinnerware was not manufactured from 1973 to 1985 but is produced today in the colors in the photos below and many others. Over the years colors are introduced and then retired. A few of those pieces I have from Mammy’s kitchen, gray, rose and a very dark green.

Fun fact, at one point some Fiesta colors were found to be slightly radioactive, due to uranium compounds being used in the ceramic glaze. I have one such piece, a bright coral salad plate. I will keep it forever. I think my Fiesta dishes will find happy homes after I die, because my daughters and at least one granddaughter enjoy pieces already.

Cut Glass dishes are not as prevalent as the other fun kinds described above. I have one cut glass bowl seen below. Cut glass is not the same as glass etching. Rather it feels slightly sharp to the touch at each of the cut surfaces. Pressed glass looks similar but is smoother and less valuable. I wish I knew the history of this cut glass bowl, but all I know is that it was my Mother’s and she loved and valued it, so I do as well.