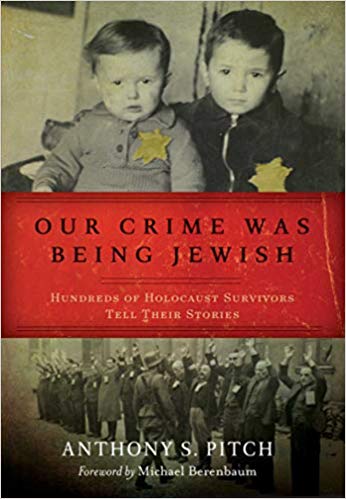 “OUR CRIME WAS BEING JEWISH” BY Anthony S. Pitch

Followers of this blog have probably figured out I read a lot of books about the Holocaust and World War II. This book which I have read twice is among the most impactful for me. The author, Anthony S. Pitch has assembled the testimonies of Holocaust survivors and published them for the world to read.  These are testimonies that comprise the film “Testimony” at the United States Holocaust Memorial Museum in Washington, D.C.

What I found so compelling in reading the accounts of these survivors is each tells their own story as only they can. They speak for no one else. These testimonies are not grouped in any specific way by age, gender, chronology or geography. Pitch states he has not used an index in his book because “many who should have been included were silenced by murder.” These are the stories of those who survived and the thing they have in common is being Jewish.

I highly recommend this book. It is heart-breaking, but so enlightening. I wish each citizen of the world could read it and remember, lest it is repeated.

“Yet, nearly 6 decades after the Holocaust concluded, Anti-Semitism still exists as the scourge of the world.” Eliot Engel

Nearly a century later not only anti-semitism still exists, but also genocide. Think of Rwanda, Bosnia, and Cambodia.