Welcome Guest Writer: Lula Reynolds traveled to Russia 18 years after my trip to St. Petersburg. She has graciously shared the post below about the city of Moscow. Thank you Lula!

My one-day visit to Moscow in 2012 was interesting but left me with lots of questions.  I had visited Communist China so knew a little about what to expect.  However, Moscow was different from China and even from St. Petersburg.  In St. Petersburg, the people and guides were open and friendly and were willing to answer our questions.  The museums were beautiful and ornate.

For our trip to Moscow, we could go by plane or high-speed train.  We chose the 4-hour train trip to see some of the countryside.  As we rode farther away from St. Petersburg, there were fewer buildings and those that we saw were very small, almost like huts, and crowded together in villages.  We were told that these were country homes.  The landscape reminded me of the movie, Dr. Zhivago, without the snow.

When we arrived in Moscow, we were introduced to our guide, a lady probably in her 50’s, dressed much like what I thought of as a typical Russian. Our first experience was a ride through the city to a Metro train station where we rode the subway for a short distance. The station was spotlessly clean and was exquisitely decorated with sculptures, chandeliers, mosaics and marble walls and ceilings.  It was a work of art, leaving us to wonder if all the stations were like this or if this was their showpiece.

Our tour for the day included a visit to the Kremlin and Red Square. Our guide kept a swift pace and throughout the day a couple of men would appear to walk beside her and check off her schedule. She kept us in tight control, asking us often not to wander from the group. At one point a couple wanted to stop at a restroom they spotted but she said no, that a restroom break was scheduled later.  When we were allowed to ask questions, she would not answer political questions.

I had always thought of the Kremlin as government buildings. We were not able to tour the government portion of the Kremlin, which is an old fortress and the seat of the President.  The part of the Kremlin we visited was the Armory Chamber which was a museum of Russian history.  It was beautiful and very crowded and we were guided through to see the armor, coronation dresses, jewelry, golden carriages, and Faberge eggs.  There was much use of jewels and gold in these items.

We had been told not to touch anything, lean against anything or take pictures.   Near the wall in several places were older ladies (with their purses on their arms) seated in chairs.  If someone accidentally touched or leaned against a wall, they would come over and remind us not to touch.

Our guide walked swiftly all day. She was off the bus and on her way before the last person exited the bus.  At one point when we were going up some stairs to a restaurant for a Russian dinner (beef Stroganoff), one of the tourists remarked that she walked so fast that we couldn’t keep up. Her response was, “Russian women are tough.”

Red Square has been the place of numerous historical and political events in the life of Russia.  As we walked in Red Square there were many people hustling about, young and old.  We noticed that the police or military would not make eye contact.

Red Square is made up of the Kremlin, the Lenin Mausoleum, the Church of St. Basil the Blessed, the State History Museum and GUM, the largest department store in Russia.

We were given an opportunity to wander shortly in the department store which is like a mall. The shops looked very similar to US shops and were brightly decorated.

Our day in Moscow was packed with sights, but I came away feeling very confined and not really learning a lot of information about the people and its culture.  I admired the exquisite and lavish beauty of the museums and churches but left wondering what daily life is like for the people in Moscow.

Scenes from Moscow and title graphic by Pixabay 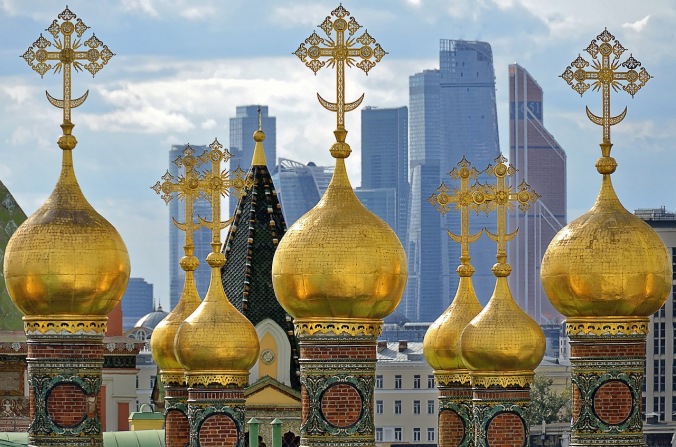