THE ESSENCE OF EACH PERSON

I believe the soul is the essence of a person. It is who they are at their core. This is not original, we’ve seen this word used by others in this series.

Since “soul” is such a difficult concept for me to imagine and since that word has connotations of both good and bad from my religious upbringing, I needed a different, more neutral word and “essence” works for me. It means a person’s intrinsic nature and immutable character. It is real, everlasting and never changing. Even after the person has died it is as recognizable as their face or their voice.

My husband, who died in December of 2014, was a nature lover. He was wise in the ways of animals and birds. He was a master at growing beautiful things. He imparted his reverence for creatures and his appreciation for all living things to each of us who knew and loved him during his eighty-five years of life.

When my two daughters and I visited their father’s gravesite for the first time we were driving along a country road on our return home. Suddenly, we all three, at the same time, saw a large group of cranes ahead of us flying in a V formation. In my entire life, I do not recall seeing more than one crane at a time and rarely in flight. I pulled my car to the side of the road and we watched this magnificent sight approach and then fly over our car in direct view of the sunroof and then behind us and off into the distance.

We did not need to discuss or compare thoughts. Each of us knew that we had experienced our loved one communicating with us. Those strong birds in flight represented his essence.

We rarely go the thirty-plus miles to that quiet old cemetery without seeing a deer, a beautiful blue bird, or some other unexpected creature. One time there was even a box turtle on the road to be rescued and repositioned in the grass. It happens at other times, too. Just days ago I opened the front door to see a beautiful squirrel in front of my porch, sitting there to remind me of my husband’s nature and his love. This was the very first squirrel at our home in five years of living here and it was a gift. Let me be clear, I am not saying that any of these creatures are my deceased husband nor his soul. I’m saying they represent his essence. I believe they are there at his beckoning.

These instances happen less often now than in the first year or so after his death. I believe he knows we need them less now than early on. I believe he knows somehow that our family continues to think of him and cherish his memory, but that we have been comforted and are more at peace now with his absence.

For more information I recommended this book: 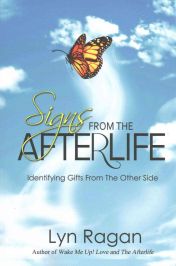 “Some cognitive scientists believe human response to music provides evidence that we are more than flesh and blood—— that we also have souls. “ Judy Picoult

Theme photo in title by Pixabay